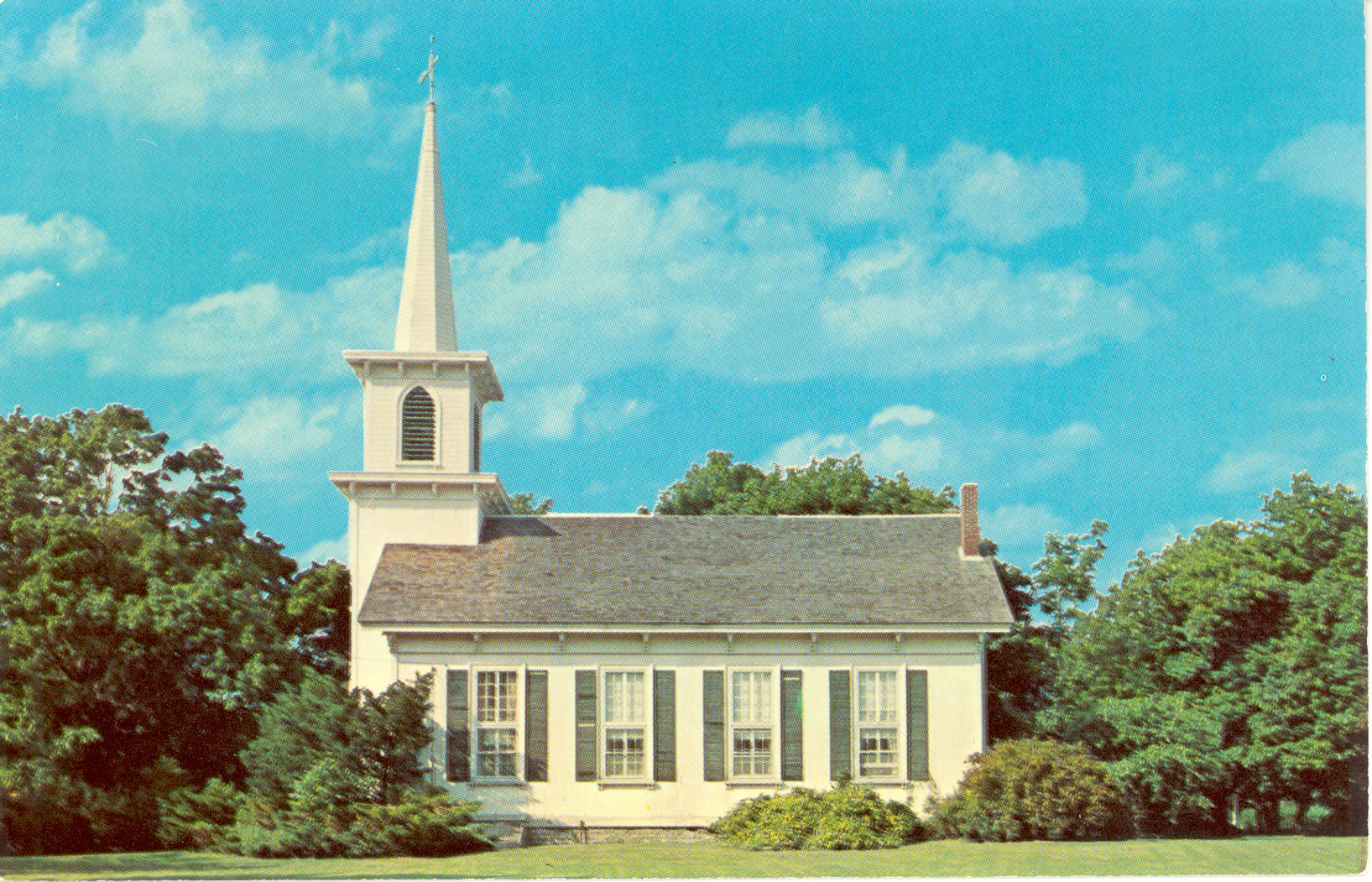 The history of the Cutchogue New Suffolk Free Library includes over 100 years of stories, community, traditions and change. Located on the Village Green, our Library stands alongside the historic Old House, the 1704 Wickham Farmhouse, the 1840 Schoolhouse, a post-Civil War Carriage House and the Old Burying Ground.

The building that is now our Library’s home was originally a church built by the Independent Congregational Church and Society in 1862. The society was formed by a group of people who split off from the Cutchogue Presbyterian Church. The structure was built on land donated by one of their members and financed through member contributions that included a wooded lot, 4 shares of stock and one woman’s gold beads.

By 1913, the building was not in use and the members had returned to the Presbyterian Church while still keeping their religious society active. The Trustees voted to refurbish the building and grounds for use as a library. In 1914 the Trustees approved the rental of the building for a dollar a year. The Library opened with a staff of volunteers and was granted a provisional charter on September 16, 1915. A furnace and electricity were installed in 1921.

In 1927, the Cutchogue Methodist Church burned down. The Congregational Society closed the Library to allow the Methodists to use the building for worship while they built a new church.

The Library was reopened when the new Methodist Church was complete and continued to operate in the Church building for a nominal rent. The structure maintained free standing shelving and no permanent furnishings so that it could easily be returned to a place of worship if needed.

Over the years our Library continued to grow but with only minor changes added to the building – a bathroom in the minister’s robing room, a door to the rear of the building for fire safety and a ban on smoking in the building was instituted.

By the 1980’s the Library had become an integral part of the community and was staffed with a full-time librarian and several part time employees. Programs such as children’s story times, summer evening movies on the lawn (with bug spray provided) and art shows hung high above the shelves, were enjoyed by all. However, the Library was seriously outgrowing its space.

The Congregational Society made it possible for the Library to buy the church building and embark on an extensive renovation and expansion project. The Library moved into the addition in 1986 and a year later renovated the “church” into the current children’s room and meeting room.

In response to the community’s growing need for more space, the Library doubled its square footage in 2008. A second story mezzanine was built throughout the entire building and a Community Room was added to the lower level by excavating the ground beneath the church portion of the building.

Today, our Library building is a blend of new and old design as demonstrated in its services as well as its structure. Over the course of last year, the Library circulated over 119,000 items, had nearly 100,000 visitors walk through our doors; 68,376 eBooks were downloaded by our patrons and 3,200 people attended Library programs. From Wi-Fi and eBooks to jigsaw puzzles and story times, the Cutchogue New Suffolk Free Library remains an active, important and central part of our community’s history. 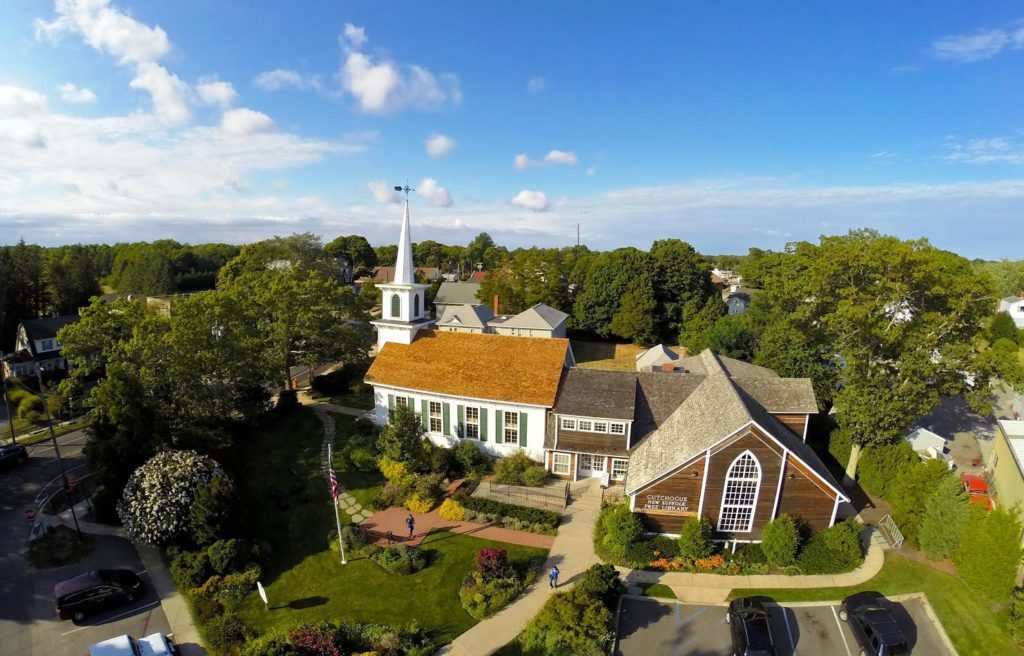 Jane Minerva served as the director of the Cutchogue New Suffolk Free Library for over 35 years. Jane started as a Library volunteer in 1963, took on the mantle of director in 1965, and received her M.L.S. from Long Island University at age 50.
Originally formed as a subscription library in 1841, the Library had been housed in an antiquated Civil War church building since 1913, where conditions were less than successful, with no winter insulation, a single heat register in the floor, a freezing toilet in the closet and raccoons in the belfry. Summer brought excessively hot barn temperatures to the interior and lots of potato bugs to share the bookstacks.

At that time, the Library was open 15 hours a week, with an insecure annual budget of under $10,000 and starting director’s salary of $2,500 per annum. Obviously, here was a challenge. Nowhere to go but straight up! 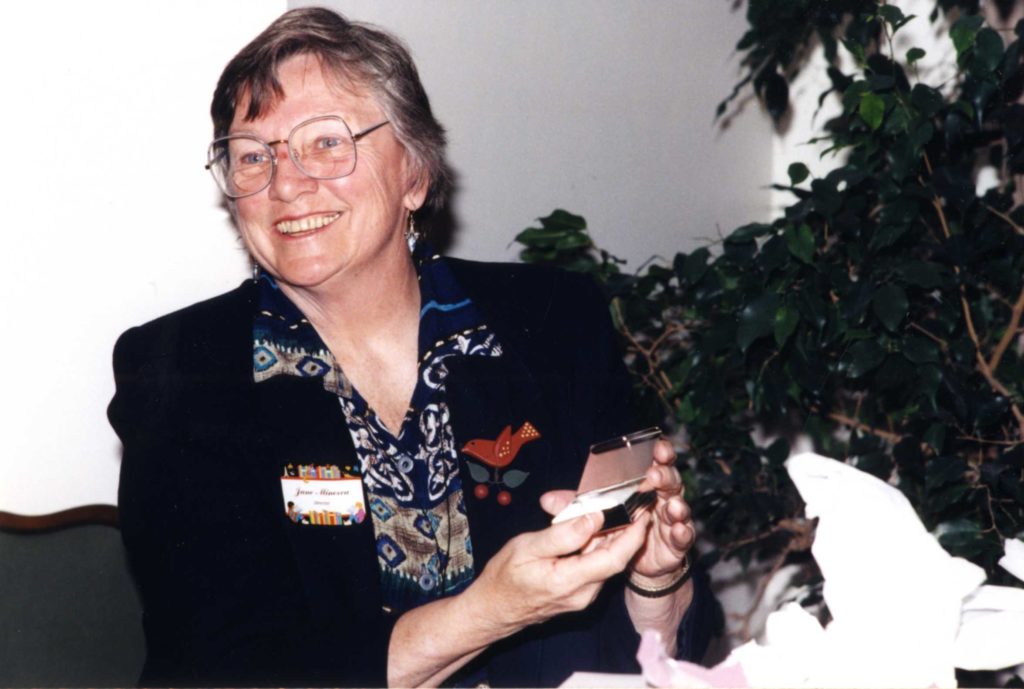 “It is a gang-busters operation. I love every living moment of it! We work hard, but there is no accomplishment without dollars, and a successful annual vote is what eventually turns the key.”

In the video below, filmed April 19, 2015, Jane details her life and experiences as the director of the Cutchogue Library.